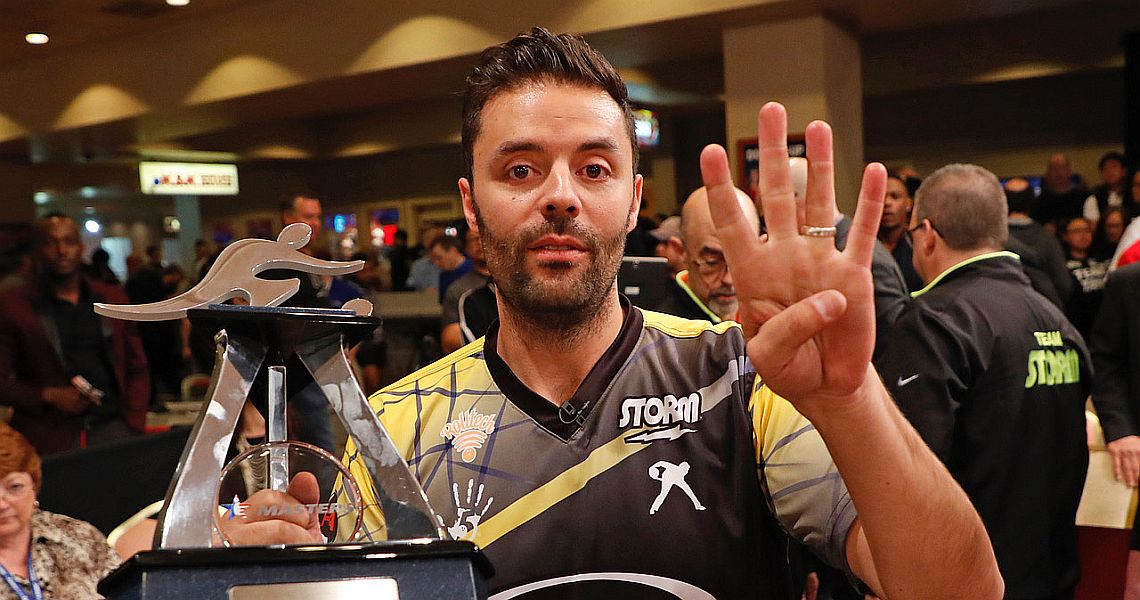 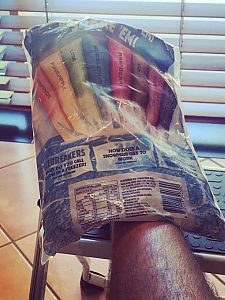 Australia’s Jason Belmonte, arguably the most successful bowler in USBC Masters history, may limp into Syracuse, N.Y., next week after escaping serious injury earlier this week while helping his grandmother move.

Belmonte, in a Facebook post where he included a photo of his foot covered with colorful ice packs (right), said his father accidentally ran over his right (push away) foot with a one-ton trailer.

“It’s fine,” the defending Masters champion reported. “A little sore, but I can walk just fine. (I) was helping my grandmother move and my foot got in the way of the trailer. But no breaks. All good.”

In addition to trying to defend his 2017 Masters title, the Australian two-handed star also will be trying to win the Masters for a fifth time (he’s the only four-time winner; featured photo), and if he’s successful, he will join the late Earl Anthony and Pete Weber as the third player in PBA history to win 10 major championships.

Belmonte will bowl the qualifying rounds beginning Tuesday, but because he’s automatically seeded into the 64-player double-elimination match play field, his real competition will begin next Friday. All qualifying and three-day match play elimination rounds of the Masters will be covered live, exclusively by PBA’s Xtra Frame online video streaming channel.

Now that the “madness” is over, PBA’s Xtra Frame will resume its exclusive coverage of PBA action in a big way, beginning with coverage of all qualifying and three-game match play elimination rounds of the USBC Masters from the Oncenter Convention Center in Syracuse, Tuesday, April 10, through the final matches on Saturday, April 14, to determine the five finalists for Sunday’s live ESPN telecast at 1 p.m. ET.

Following the Masters, Xtra Frame heads to Portland, Maine, for the “draw party” to determine the bracket positions for the 64 players enter in the PBA Xtra Frame Port Property Management Maine Shootout. Coverage of the draw party on Monday, April 16, at 12:50 p.m. will be followed by the elimination matches Tuesday and Wednesday, including the semifinal and title matches beginning at 5:50 p.m. The XF Maine Shootout will be the final qualifying event to determine the eight-player field for the PBA Tour Finals May 4-6 at Thunderbowl Lanes in Allen Park, Mich.

On the heels of the Maine Shootout, Xtra Frame will cover all eight OceanView at Falmouth PBA League teams as they bowl a “seeding” tournament on Friday, April 20, to determine the matchups for Saturday’s opening round of best-of-two-game Baker team matches.

Following its Maine schedule, Xtra Frame heads south to kick off the 2018 PBA50 Tour
season with start-to-finish coverage of the PBA50 Florida Open from New Port Richey, Fla., April 21-23; the PBA50 National Championship presented by Radical – the senior tour’s first major of the year – from The Villages, April 24-28, and the PBA50 Mooresville Ford Open from Mooresville, N.C., April 29-May 2.

Fans can watch the entire month of coverage for only $7.99. For XF subscription and schedule information click here.

The countdown to unveil the complete list of the PBA’s “60 Most Memorable Moments” in its 60-year history continues, one a day, Monday through Friday, on all PBA Network outlets. Last week, “memorable moments” 36 through 40 were unveiled. Here are those five moments as the countdown continues:

36) At age 50, Walter Ray Williams Jr. swept every major statistical category during the 2009-10 PBA Tour season en route to a record seventh Chris Schenkel PBA Player of the Year honor. Williams also was named Bowler of the Decade for the second consecutive decade – a feat unprecedented in the sports world. A season earlier Williams became the first player to surpass $4 million in PBA career earnings.

37) PBA Hall of Famer Pete Weber became the first player to complete the PBA Triple Crown for a second time when he defeated Jason Belmonte, 224-179, to win the 2013 PBA Tournament of Champions at Woodland Bowl in Indianapolis. He also became the oldest player to win the TOC at age 50.

38) The 1991 PBA Tournament of Champions was delayed 40 minutes due to a bomb threat at Riviera Lanes. It turned out to be a hoax and David Ozio went on to defeat Amleto Monacelli, 236-203, for the title which led to 1991 PBA Player of the Year honors. 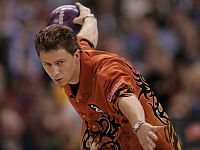 Baltimore’s Danny Wiseman has had his share of time in the spotlight as a 12-time PBA Tour champion and PBA Hall of Fame inductee, but he got an unexpected “15 minutes of fame” on opening day of the Major League Baseball season when he attended the Orioles’ home opener against the Minnesota Twins – and caught the game-winning 11th-inning walk-off home run by Baltimore’s Adam Jones.

Well, he sort of caught the ball. Wiseman admitted the sizzling line drive went right through his hands and hit him the chest. But, he noted, he got the ball…and a sizeable welt.

“It won’t out-rank my (USBC) Masters win (at Miller Park in Milwaukee, pictured) or my title in Baltimore in 1990, but in terms of excitement, yah, it ranks right up there,” Wiseman said.

For a more detailed explanation, check out Wiseman’s television interview by clicking here.

Houston’s Jay Nephew won his last seven matches in the eight-game modified round robin finals to pull away from the field and win his first PBA title in the Houston Copperfield Bowl Southwest Challenge, presented by 900 Global, on Easter Sunday.

Nephew, who finished second in last year’s Copperfield event, had previously won a Challenge event as a non-member, but didn’t earn a PBA title because he was an amateur until 2015. Along with his title he earned the $2,000 winner’s check.

After qualifying fifth in the 13-game qualifying portion of the event, Nephew started the match play finals with a loss in his first match, but won his next six matches to build a 24-pin lead over amateur Jacob Heger from Spring, Texas, going into the final position round match where he defeated Heger, 247-183, for the win. Heger maintained second place over former USBC Queens champion Maria Rodriguez, a Colombia native now living in Austin, Texas, who finished third.

The only PBA Regional event on the April 13-15 calendar is the PBA Bowlers Discount Pro Shop East Open, presented by Hammer, at AMF Towson Lanes in Towson, Md.

Closing out the month over the April 27-29 weekend will be the PBA Rockaway Lanes East Open, presented by Storm, in Rockaway , N.J., and the PBA Brighton Construction Myrtle Beach South Open at Myrtle Beach Bowl in Myrtle Beach, S.C.