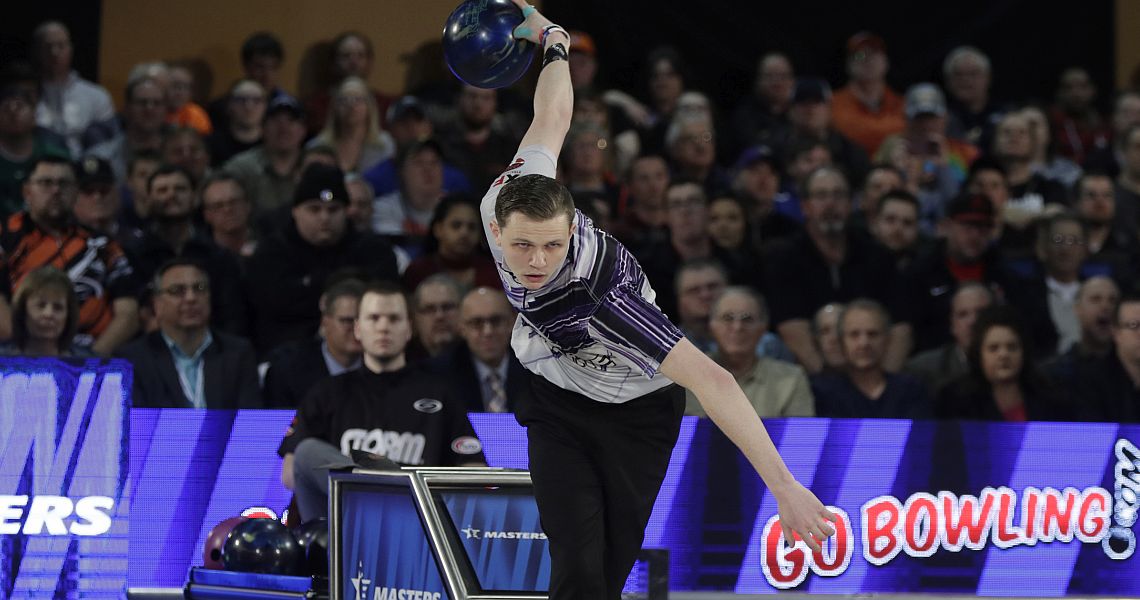 The second-year PBA member (featured photo), riding a hot streak after a third-place finish in the PBA Tournament of Champions in February followed by his first PBA Tour victory in the Masters, was headed back home to Holly, Mich., when PBA CEO and Commissioner Tom Clark, fellow competitor Chris Barnes, the recently-inducted PBA Hall of Famer, and others convinced Anderson he should head to Portland, Maine, instead to bowl in the Port Property Management PBA Xtra Frame Maine Shootout.

Because Anderson had not been drafted by an OceanView at Falmouth PBA League team, which will compete later in the week at Bayside Bowl in Portland, he had planned to bypass the Xtra Frame event preceding PBA League competition in Maine.

But with his plans changed, Anderson headed to the airport in Syracuse to fly to Portland. Clark, Barnes, PBA Vice President-Marketing Janay Haggerty, PBA Social Media Manager Kim Richter and a bunch of other PBA players and staff members also were at the airport when all flights out of Syracuse were cancelled. That’s when the “fun” began as everyone scrambled to figure out how to get to Portland.

“I’m at the airport when Barnes texted me and asked what I was going to do,” Anderson said. “I was headed off to rent a car when I ran into Kim (Richter) and Tom (Clark) coming down the stairs.”

Haggerty was off looking for a car to rent for the PBA staffers drive to Portland, and they asked Anderson and Barnes if they’d like to ride along. “I’m waiting for Chris, who was trying to get a refund for his flight, when Janay rolls up with a mini van,” Anderson said.

Despite horrid weather conditions, including freezing rain and frigid wind, the fivesome headed to Portland – about a half-hour behind PBA Deputy Commissioner Kirk von Krueger and his wife, Mary, who had gotten a head start. Richter was behind the wheel at the start, and Barnes took over driving duties as they headed through New Hampshire, when the van’s digital reading suddenly indicated the left rear tire was losing air…at a rapid pace.

“There was no exit for about five miles,” Haggerty said, “but we finally got to a gas station in the middle of nowhere that was still open at around midnight on Sunday.

“Tom and Barnes went into the gas station, and Tom comes out with a can of inflate-a-tire,” the 6-foot-2 Anderson said. “He wasn’t sure what to do with it, so Janay (who is 5-foot-4) loaned me her jacket, and I tried to inflate the tire for 15-20 minutes in cold, freezing rain. The tire looked better, but then I saw big hole blowing air out as fast as it was going in.”

The station attendant “comped” the hot chocolate, and told the group he had a buddy who did roadside repairs. So a quick call summoned help.

The PBA group never got his name, but afterward they nicknamed their rescuer “Lugnut.” Haggerty’s earlier call to the car rental company had resulted in little help other than learning most rental cars these days do not include a spare tire…and that help would not be on its way until Monday morning.

“Lugnut,” however, knew there was a “secret compartment” in the van that housed an emergency “tire” of sorts. After unloading all of the luggage and bowling equipment in the van, Lugnut found the emergency tire, inflated it and the group was almost ready to resume the trip as Lugnut drove away. But suddenly Lugnut put his tow truck in reverse and roared back at high speed.

“I forgot to check lugnuts,” he said. “I wouldn’t be able to sleep if I didn’t check the lugnuts.” Hence the nickname…

Like all good stories, this one ended at almost 4 a.m. when the cold, weary PBA travelers checked into their hotel rooms in Portland, fortunate that there was no serious activity other than a practice session scheduled for Monday.

“I’m going to tell this story the rest of my life,” Anderson said. “Who would have thought… I had no plans whatsoever about coming to Maine, but those guys all talked me into coming, so it’s their fault…” 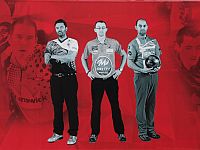 The PBA and Professional Women’s Bowling Association have unveiled a cooperative billboard on 18 wheels that will be seen by thousands of motorists who will “follow” professional bowling as it traverses the country in the months ahead. 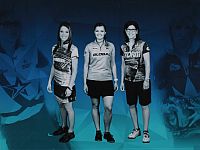 The co-branded PBA-PWBA semi-trailer – one of two that transport bowling equipment for the professional tours – prominently features PBA stars Jason Belmonte, EJ Tackett and Dom Barrett on one half, and PWBA stars Shannon O’Keefe, Daria Pajak and Liz Johnson on the other, with additional players shaded in the background.

The 53-foot trailer is expected to travel roughly 65,000 miles in a given year. For perspective, that translates into roughly 21 one-way trips between Portland, Maine, and the Pacific Coast.

Before Bayside Bowl opened a few years back, co-owners Charlie Mitchell and Justin Alfond did considerable research into bowling center menus to plan their food service offerings. Since bringing PBA competition to Portland, Maine, Bayside Bowl has expanded its menu with a few PBA-inspired specialty pizzas.

“Named after a few of our favorite PBA bowlers, these pizzas will bring out the pro in you,” the menu says. Mitchell admitted they aren’t actually pizzas created by the players themselves, but, well, they each have a certain flair: 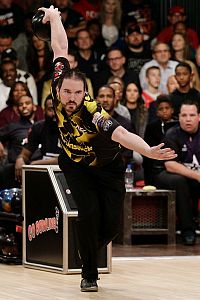 In the wake of last week’s USBC Masters in Syracuse, N.Y., the field of possible contenders to unseat Sean Rash (pictured) as the eighth player in the elite field for the upcoming PBA Tour Finals in Allen Park, Mich., was reduced to Tom Smallwood of Saginaw, Mich.

With only this week’s Port Property Management PBA Xtra Frame Maine Shootout remaining to qualify for the PBA Tour Finals, Smallwood’s bid to displace Rash fell short when he lost his best-of-three-game Round of 32 match to 2017 PBA Rookie of the Year Matt Sanders of Indianapolis.

Coming into the Xtra Frame event in Portland, Smallwood had to finish fourth or higher to overtake Rash after Rash was eliminated in the opening round in Portland, failing to cash. Smallwood, who was $3,995 behind, earned $1,000 in his loss.

The PBA Tour Finals, which will be contested May 4-6 at Thunderbowl Lanes and televised by CBS Sports Network as part of the 2018 Go Bowling! PBA Tour schedule.

The players who had secured their berths in the PBA Tour Finals prior to the XF Maine Shootout are defending champion EJ Tackett, Jason Belmonte, Jesper Svensson, Dom Barrett, Anthony Simonsen, Marshall Kent and Tommy Jones.

Next up will be the start of the 2018 PBA50 Tour season where Xtra Frame will provide live start-to-finish coverage of the PBA50 Florida Open from New Port Richey, Fla., April 22-23, followed by the PBA50 National Championship presented by Spanish Springs Lanes and Radical – the senior tour’s first major of the year – from The Villages, April 24-28, and the PBA50 Mooresville Ford Open from Mooresville, N.C., April 29-May 2.

26) The PBA Hall of Fame’s inaugural class included one of the most talented groups in bowling history: Ray Bluth, Don Carter, Carmen Salvino, Harry Smith, Dick Weber and Billy Welu in the Performance category, and Frank Esposito and Chuck Pezzano for Meritorious Service.

27) Bob Benoit, in his first game ever on national television, defeated Mark Roth, 300-255, to win the 1988 PBA Quaker State Open, becoming the first player to throw a perfect game in a nationally-televised title match.

28) PBA Hall of Famer Johnny Petraglia became the first player in PBA history to win a national tour or national senior tour title in six different decades after winning the 2012 PBA Senior Dayton Classic. Petraglia joined the PBA in 1965 and won his first title in the 1966 PBA Fort Smith Open. In 1971, Petraglia won five titles including three consecutive wins culminating with his first major championship – the 1971 Firestone Tournament of Champions. The TOC title, coupled with his 1977 BPAA U.S. Open and 1980 PBA National Championship wins, made him the second player ever to win the PBA’s prestigious Triple Crown (joining Billy Hardwick). Today there are six players who have completed the Triple Crown.

29) During the PBA’s 25th anniversary season, Norm Duke became the youngest bowler to win a PBA Tour title when he won the 1983 Cleveland Open at the age of 18 years, 345 days.

30) In 1965, Firestone begins its sponsorship of the PBA Tournament of Champions, a partnership that started at Firestone Bowlarama Lanes in Akron, Ohio. The partnership, which was the first commercially-titled sports event ever on national network television, lasted 29 consecutive years. In 1966, Fairlawn (Akron), Ohio-based Riviera Lanes hosted its first Firestone Tournament of Champions and would become the iconic home to the Tour’s most prestigious major through 1994. 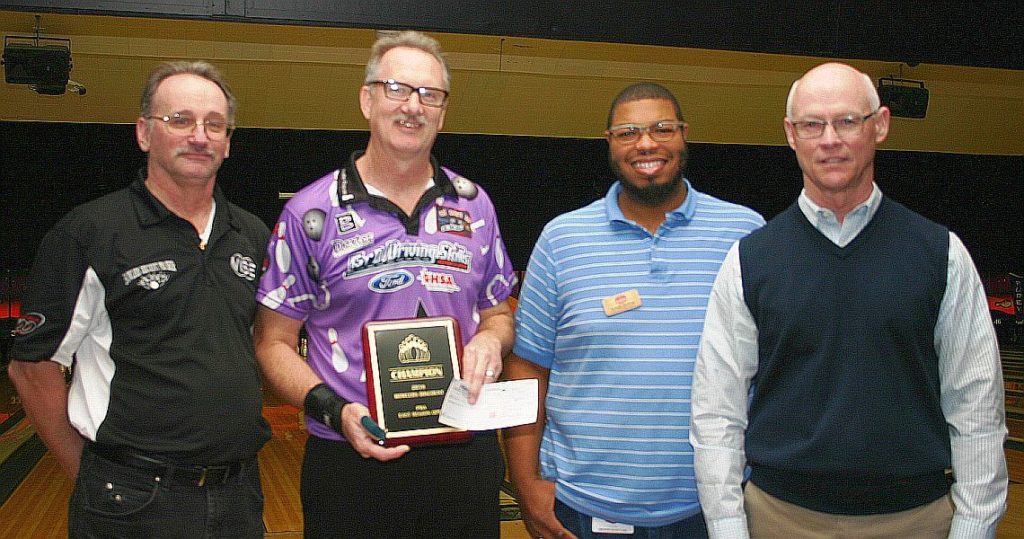 Williams, who had a free weekend between the USBC Masters and the Port Property Management PBA Xtra Frame Maine Shootout in Portland, qualified second behind Australia’s Sam Cooley. He disposed of Eric Cornog of Cherry Hill, N.J., 2-1, in the best-of-three-game Round of 8 before slipping past Ryan Shafer of Horseheads, N.Y., in the semifinal round, 172-163, when Shafer failed to strike in his 10th frame.

Chase, who was looking for his first PBA title, qualified fourth and eliminated Gary Haines of West Babylon, N.Y., 2-0, before ousting Steve Pavlinko Jr. of Sewell, N.J., 213-157, in his semifinal match. Chase saw his chance to beat Williams disappear when he left a 10 pin on his second shot in the 10th frame after striking on his first shot.

Closing out the month over the April 27-29 weekend will be the PBA Rockaway Lanes East Open, presented by Storm, in Rockaway, N.J., and the PBA Brighton Construction Myrtle Beach South Open at Myrtle Beach Bowl in Myrtle Beach, S.C.

Jason Belmonte lives half a world away but like millions of others, he was profoundly affected by the shootings at Marjory Stoneman Douglas High School. How he was impacted and what he plans to do in the wake of the South Florida tragedy are explained in a feature story by USBC’s Matt Cannizzaro on bowl.com. To read Cannizzaro’s story, click here