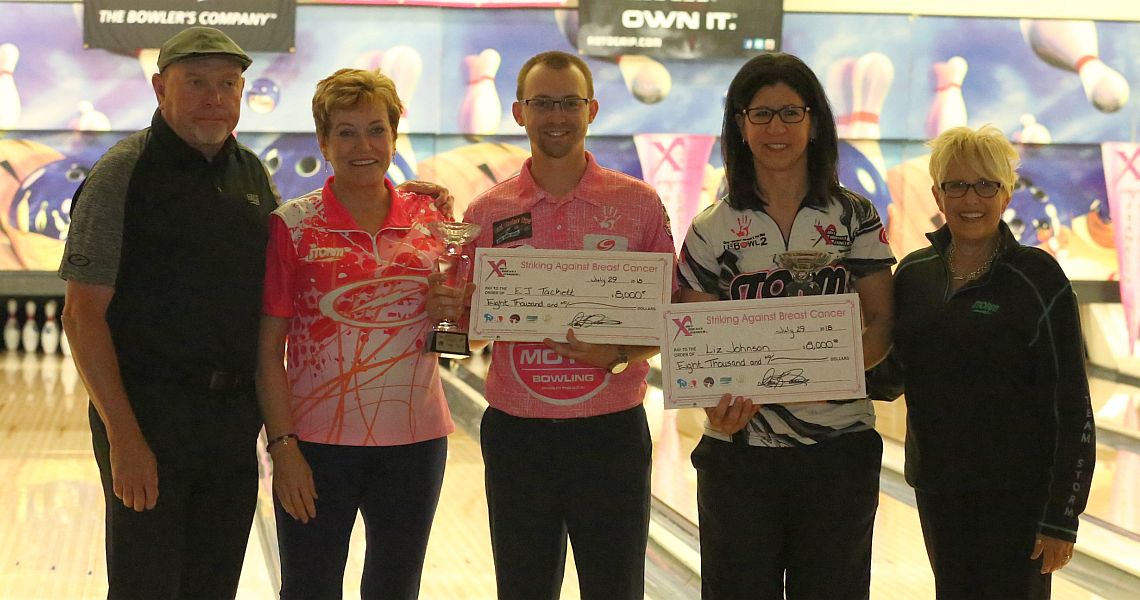 Tackett, PBA’s 2016 Player of the Year, and Johnson, one of two women ever to win a PBA Tour title, led the tournament through 17 games before being overtaken by Belmonte and Asbaty.

Trailing Belmonte and Asbaty by 10 pins going into the final match, victory in the tournament was going to be decided by whichever team won the game.

Thanks in great part to a bold move by Johnson to move to an extreme outside angle on the left lane while continuing to play an inside angle along with the rest of the field on the right lane, she gave her team the edge with a 212-192 margin over Asbaty.

Tackett was unable to strike in his 10th frame, but Belmonte, needing a double for the win, left a 10 pin on his first shot in his 10th frame. Belmonte out-scored Tackett, 214-208, but it wasn’t quite enough.

Tackett and Johnson, bowling as partners for the first time in the event, won the final match, 420-406, and earned 30 match play bonus pins to post a composite 20-game total of 8,797 pins to win by a 34-pin margin.

“I’m ecstatic,” said Tackett, who earned his 11th PBA Tour title and second of the 2018 Go Bowling! PBA Tour season. “I’m so happy for Liz. I’m so proud to be part of this win. There was not a single person in this building who could have done what she did in that last game. It was absolutely amazing watching her play outside on one lane, inside on the other.

“There are only two people in the world who can do what Liz did – her and Norm Duke. That’s one reason she is the greatest woman bowler of all-time.”

“I’m pretty numb,” Johnson said of her 20th PWBA title. “It’s taken me 17 years to win here. People say ‘You’ve won everything,’ but this is a major title to me. I’m so proud. This is my favorite tournament of the year.

“This has always been an event unlike any we bowl all year and it’s getting bigger and bigger,” she added. “When I started bowling this event I think I was one of the only ones coming from out of town. Now players come from all over the country and all over the world.”